There used to be a time when the 3 kids would all be safely nestled in bed by 7.30pm meaning the husband and I, had a whole evening to chill from the rigours of the day, recover from wrestling kids into baths then bed, and basically to relax and have a chat.  Oh, and to finish off that bottle of wine we just opened ……

As kids get older, bedtimes get prolonged to such an extent that many is the time, I’ve gone to bed before my oldest has turned in.  On the rare occasions I can stay awake long enough, and we’ve finally ousted them to their beds, finding a decent programme to watch on the TV that isn’t full of the usual trite material, predictable plot lines and stiff acting, has been a challenge.  You’d have thought that in amidst what must be in excess of 300 channels of viewing ‘delight’ (a term I use in the loosest sense of the word), we’d find the odd gem which has us switching on in anticipation.

Now Autumn has arrived, the TV networks are all ‘premiering’ their newest and brightest ‘new season’ of programmes to watch.  To further ‘up the stakes’, we’ve now watched all previous and current season episodes of our favoured programmes of choice, and are on the search for some engrossing new ones …

Oh, bring me back the days when life was much simpler and all we had were 3 basic channels of TV in the UK to choose from – 4, if you count Channel 4 (although this didn’t happen till 1982).  All of which had to be watched ‘live’ – none of this ‘on demand’ or ‘record and watch later’ malarkey.  Plus, on the BBC it would ‘closedown’ for the night around midnight – usually, after the final weather forecast and a quick blast of the national anthem – and off you would trot to bed.  A ‘get what you were given’ philosophy.

Nowadays, if we’re not careful, we can waste the entire evening ‘browsing’ the vast number of channels in the vain search that we stumble upon something that holds our attention for longer than 5 minutes.  This is somewhat of a challenge with Canadian TV, which seems to insist on interspersing each single programme with adverts and intermission breaks every 2 minutes.  I appreciate they have income to generate, but for goodness sake, no sooner have we got going, then they break for ads.  The latest trend seems to be cutting to the ad break as soon as the opening titles have played.  What’s all that about?  Bizarre.  Back in the UK, advert breaks (only on the commercial channels of course, – not the revered BBC), are few and far between in comparison, and usually, stimulate the need for a brew to be made during the intermission.  Even I can’t make (and consume) enough cups of tea to keep up with the sheer volume of ad breaks which are instigated over here. Give me strength ….

So, in this case,  thank the Lord for modern technology and the ability to ‘record and watch’ later – flicking on fast forward through the ads.  No chance to drop off to sleep on the sofa as the programme never goes for longer than 5 minutes before I’m stretching for the remote just to rush us through the ads.  The batteries I’m going through on the remote are costing a fortune – mind you, the stretching exercises each evening certainly saves me the money from going to a gym …… 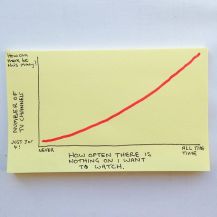 We’ve had to build up a repertoire of programmes that are suitable for the various age groups of our kids – there’s none of this 9pm ‘watershed’ over on this side of the pond.  You’ve got to be on your guard as I’ve been caught out on many occasions with letting the youngsters browse the channels, only to find strong language and particular content that I’d rather they didn’t watch being aired.  It’s a minefield.

I’ve also come to the conclusion that along with ‘certificates’ or ‘warnings’ that are placed on programmes regarding the content, they could also do with another category entitled, ‘level of comprehension’ required.  Maybe I need a specific category for me alone, but many is the time I’m watching these programmes in complete bafflement and confusion as to what’s going on – requiring a level of translation and articulation from my jaded husband who just shakes his head and sighs at my lack of cognition.  His usual withering look and wearied question of, ‘do I need to explain from the very beginning’, accompanied by a resigned inevitability, has him providing a more simplistic explanation of the events over the past episode with the occasional ‘tip off’ of what to look out for, in the next edition.  I embrace this degree of insight with the same delight as if someone has finally explained the football off-side rule in a manner which I can actually understand.

It passes the time.  I like to think of it as my way of provoking some discussion and debate following the various goings on we’ve just viewed.  Good job the remote control can’t be used on me otherwise I strongly suspect he’d be tempted to press the the ‘off’ switch on a regular basis ….