One of the things that takes some getting used to is driving in Canada.  Maybe it’s just Edmonton, but there are some nuances that have me completely baffled each and every day as to the logic behind their safety for pedestrians, road users – or anything else in between.

The first thing you probably think of when driving in Canada (or the US for that matter), is getting used to driving on the wrong side of the road – and by this, I mean driving on the right rather than the left ;-).  I’m British so therefore, the left hand side is the correct side – regardless of the fact that about 75% of the world’s countries drive on the right.  Despite the modern invention of the car, the side of the road on which we drive has developed through centuries-old custom and tradition.  The fact that most people are right-handed is the biggest factor contributing to which side of the road people initially chose.  A further reason I stumbled across made me chuckle – ‘Ancient Romans drove chariots with the reins in their dominant right hands to allow them to whip a horse with their left.  That way there was little risk of accidentally whipping a passing chariot.  But if a warrior needed to do battle from a horse, he could attack a passing opponent on the right with his stronger hand‘.  Not much has changed.  Another key influence in driving direction was Henry Ford, who designed his Model T with the driver on the left.  That decision meant cars would have to drive on the road’s right, so that passengers in both the front and back seat could exit the car on the curb.  Apparently, countries like the UK remain on the left-hand side down to sheer stubbornness and practicalities.  I like to think of it as something we’ll be proven right to stick to …… 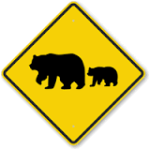 Anyhow, it only takes a short while to get your brain functioning in the opposite direction – plus, it’s made a lot easier with wide roads and absolutely gigantic trucks and cars and for the most part, everything is largely automatic transmission so having to cope with manual adjustments just means operating the windows and doors …. what couldn’t be easier?  Master this, and that’s the least of your problems …..

Roundabouts.  Those reading this in Canada who are of UK descent will be physically groaning.  The concept of a roundabout and right of way seems to be lost on most Edmontonians – to the point that the ‘Driver Safety Handbook’ devotes a specific section to this very topic.  They don’t appear as road furniture often, but when they do, seem to cause complete and utter confusion.  Adopting the correct lane, yielding to cars coming from the left, and providing enough indication of your intentions to other road users – all seem to be a total anathema to the majority of drivers.  For the serious offenders, I’d send them to Warrington, England for 2 days and get them to navigate from one side of the town to the other.  It’s riddled with the things to the point of excess, but will certainly rectify any deficiencies in driving talent with regards to roundabouts.

Pedestrian crossings.  Simple you may think.  For the pedestrian, a green man (well, technically – white), means ‘walk’, and an orange hand indicating ‘stop’, means just that.  And people abide by these totally and utterly.  Not so in the UK, where we adopt the approach of using the pedestrian signs as pure indicators of the severity of risk in crossing a road – and often proceed with or without them being taken into account.  Now the Canadian system is great, until as a vehicle user you wish to make a turn left or right at a junction.  At this point, the pedestrian light is most likely on ‘white’ too, and you have to not just navigate the turn amidst other vehicles on the road, but also minimise the impact of running a pedestrian over in the process.  And pedestrian’s don’t rush either – there’s no polite recognition that a car may also be wishing to turn across the crossing and a degree of speed adopted to aide your plight – oh no.  As a driver, you have to sit there and wait whilst coffee is balanced, iPhones checked and headphones repositioned by those walking.  How on earth there’s not more accidents with pedestrians I’ll never know – and statistics to try and either prove my point or completely distill it are not readily available.  Maybe that’s a sign ….

Finally, the most fab thing is being able to make a right turn on a red light (providing it is safe to do so, obviously).  Sheer brilliance – and the novelty of turning right on a red light never wears off.  In fact, I’ve now worked out that as the roads are largely constructed on a grid system, if I ensure all my journeys are undertaken in a clockwise direction, I get there a lot quicker and easier than trying to fight the opposite way – unlike my sat nav who usually insists I’m attempting to get to my destination in the most inefficient direction.  I’m female, and this is one of those instances which I usually take great delight in proving my skill to the electric unit (who clearly couldn’t care less), for completely ignoring.

Canadians are almost there with never having to vacate your vehicle whilst going about your weekly chores as most of the outlets operate as drive-thu’s.  Whilst these are convenient for some things, what always makes me chuckle is the length of the drive-thru vehicle queue at the coffee shops – when quite often the shop itself is empty and it would be much quicker to park up, get out and walk into the store!  You’ll notice something prevalent in the front seat of every vehicle – a drinking cup which is normally holding a recently purchased coffee.  God only knows what will happen to people in Canada if the world’s supplies of coffee beans ever dry up…..

All in all, driving over here is fun and keeps you on your toes.  The traffic is non-existent compared to UK standards so a tail-back quite often is a couple of cars deep – rather than a couple of hours long.  I’m just not sure I’ll fit back into UK driving as easily when we return.  But that’s a problem for another day ….. I’m just waiting for my coffee at the drive-thru …….

6 thoughts on “Driving me crazy …”