Heritage.  Whenever I hear the word, I have a preconception about what it includes and immediately assume it can’t possibly interest me as I’m too young and focused on looking forward into the future – not back at times once passed.  However, I accept it’s purely a mindset and sometimes it can offer the stability and grounding that enables us to move forward and build on what we have today.

It was with this in mind that I gingerly entertained the prospect of visiting the Calgary Heritage Park with the kids.  We’d received several prompts and recommendations to visit it – one from an extremely earnest chap fronting the Visitor Information Centre at the bottom of the Calgary Tower.  He was so articulate about the features the Park contained – fabulous bakery, original steam train, Victorian fairground rides, that we were swayed by his enthusiasm and decided to pay it a visit.  And were glad we did.

It’s Canada‘s largest living history museum and covers Canadian history from 1860 through to the 1950’s, based just south-west of Calgary.  Established in 1964, it’s currently celebrating it’s 50th year and whilst there’s an admission fee, all the fairground rides, train trips and journey on the steamer around the reservoir are completely free.  Not only have they re-created a small village as it originally might have been, they’ve transported many of the historical buildings to the park and placed them on display.  And not as ‘display cabinets’ with ‘do not touch’ signs dotted all around them as you may find in other countries.  No, you’re invited to participate in the houses, they are fully functional with staff playing ‘acting’ roles as residents of the village and acting these out with aplomb.  You genuinely do think you’ve been transported back in time.

The bakery was truly fabulous.  Staffed with bakers busily hand-making the produce to sell, we decided to choose a variety of baked goods – the cinnamon rolls were the best we’ve ever had, and the Canadian butter tarts (a speciality of Canada), were absolutely wonderful (to the extent that I’ve had to seek out a recipe online to try and replicate the tarts once we get home!).

At various intervals during the day, the ‘villagers’ act out a ruse and there’s an ongoing saga which continues for a few hours across different parts of the village.  It’s good acting, as authentic as it can get, and the kids loved watching the antics.  There’s an original newspaper press, with two chaps demonstrating and printing an edition of the ‘village’ paper.  Having to explain to ‘kids’ how newspapers were produced compared to today’s modern equivalent is an insight in itself – how quickly technology has moved the newspaper industry forward.  And yet, it’s great to see one in full working condition.

We moved onto the school which was complete in all furnishings and decorations.  Blackboards with chalk – again, try explaining to the kids of today who are used to smart boards and IT graphics, how things used to be.  Being British, I was amazed to see the Union Jack up in the classroom and pictures of Queen Anne – I hadn’t quite appreciated the extent to which Canada was a British Colony before it became independent.  It was just like visiting a Victorian classroom in England.

The kids had heard that there was the opportunity to make home made ice cream, so we made our way to the cottage where this was happening.  I’m ashamed to say I’ve never made ice cream from scratch and watched as the kids all participated in putting the custard and cream in a central compartment, then filling this around the edges with ice and rock salt.  It’s amazingly simple.  They all took turns to churn the ice cream over the next 30 minutes, with their hard work being rewarded with being able to eat what they’d made once it was ready.  Collectively deciding it was ‘the best ice cream they had ever eaten’ and after returning for several repeat scoops until it was finished, is something which has stayed in their memories ever since.

We took a trip on the steam train which transports you around the 127 acres, and with 3 stations, provides the opportunity to move quickly from one side of the park to another and see all the various exhibits.  There was an old colonial house with a lady busily making a fruit pie inside with whom you could watch and talk, plus the village store which offers candy sticks and sweets for 50 cents.  There was a saloon offering ales and beers, and we stumbled across a surveyors house with maps and equipment which they used to create the original maps and methods of navigating across the land.  The ‘surveyor’ proudly announced that we were stood in the oldest building in the Heritage Park dating from 1870.  I couldn’t help but smile, as it’s only on occasions like this that you realise how recent that actually is.  In England, we’re so used to history dating back to well before the Roman times, that for something as recent as 1870, it’s classed as modern by our standards – my house in the UK is older than this!  That said, the feats which have been achieved since this time in developing the country are impressive and seeing this in a Heritage Park is a superb way to provide a focus on a country’s history and subsequent development.

We saved the Victorian fairground till later in the day – as motivation for the kids as we made our way through the many interesting buildings and things to see.  There’s a ferris wheel which provided much amusement, and an old ride very similar to the original ‘waltzer’ running on metal wheels, plus a swing carousal which we all enjoyed.  The best ride of all was a Victorian caterpillar ride which part way through, had a mechanical cover which covers the entire ride – rather like a caterpillar to those watching – but for those in it, means you are cascaded into darkness still moving up and down.  The whole family loved it and with smiles all round, everyone declared it’s as good as the rides of today.  You can forget all the latest gizmos and gadgets – this simplistic form of entertainment had us laughing out loud and having a great time. 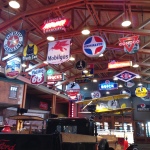 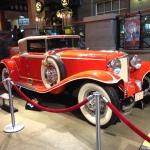 For any motoring buffs out there, there’s ‘gasoline alley’ which is an extensive collection of vintage automobiles in pristine condition – some of which you can sit in and experience ‘hands on’.  There are old oil and gas pumps – you forget how colourful and attractive these were; and along with all the vintage signs and banners, it’s an uplifting and interesting place to see.

So, what did we think about the Heritage Park?  If you’re ever in the vicinity, do check it out.  It certainly made me forget the connotations the word ‘heritage’ usually conjures in my mind.  Heritage is as simple as enjoying the journey from where something has come from, to where it is today – and providing the basis for where we go tomorrow.