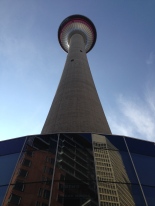 The skyline of Calgary has all the hallmarks of an American city looming into view.  As you come in from the West, you pass the Calgary Olympic Park which was built for the 1988 Winter Olympics.  It’s a huge site, with the iconic sky jump (where Eddie the Eagle made his name), bobsleigh runs, skeleton, smaller jumps and the luge.  It’s a lasting legacy from the Olympics, aimed at every age and ability, but also a source of inspiration and challenge for those wishing to participate at future Olympic Games.

In the distance, you can just make out the Calgary Tower – which held the burning flame at the top and could be seen across the city and beyond – during the 1988 Winter Olympics.  Through the centre of Calgary runs the Canadian Pacific Railway, along with the Bow River which almost divides the City in half.

First on our list was a trip up the Calgary Tower.  At 1228m above sea level, it’s the highest 360 degree observation deck in the world, with a lift taking you to the top in 62 seconds.  Along with the latest technology gadget acting as your information guide in hand and through headphones, you can watch the screen as it maps your progress quickly up the tower.

At the top, it truly is impressive.  The Tower offers 360 degree views across the city and beyond, and you’re left to your own devices to listen to the guide, use the touchscreen pad, and just take in the sights.  For the brave ones, there’s a clear walkway where you can look straight down the side of the tower and down on to the streets below.  Pretty daunting, but an adrenaline hit all the same.

From the Tower, we walked northwards to the Bow River.  As in Edmonton, the winters are cold and all the buildings and blocks are cleverly connected by ‘pedways’ on the second floor, which enable you to navigate your way across the city without ever venturing outside.  Brilliant!

Older historical buildings from the late 19th Century upto the mid-1930’s are set alongside the modern skyscrapers of today.  In fact, when the original buildings were being constructed, there was a mandate to ensure all the stone used was from the local areas, so therefore, you’re left with buildings in a beautiful yellow sandstone colour nestled in amongst the modern skyscrapers of today.  It gives a wonderful contrast and historical feel to Downtown Calgary.

It’s more of a commercial and business centre than Edmonton, and you do feel a difference in the air between the two.  However, typical of Canadian cities, there’s always parks and play areas for children and adults alike.  The Prince’s Island Park – not named after a royal as you may think, but Peter Anthony Prince, who came to Calgary from Quebec  in 1886.  It’s a superb oasis, also providing host to many of Calgary’s large events, and is an excellent park and area of calm amidst Calgary Downtown.

It would be remiss of me not to mention the shopping opportunities – research obviously I forced myself to undertake purely for the purposes of writing this blog.  Let’s just say, for all female readers out there (and a select portion of men who enjoy the recreational elements of this too), you will not be disappointed.  In fact, not only have they developed large seating areas (‘men waiting rooms’ for all intents and purposes I thought), they provide entertainment for the kids brought along too.  Offering something for everyone and keeping people distracted, whilst those who enjoy the retail experience savour the delights of shop upon shop enticing you in – and doing an excellent job of separating you from your wallet!  We stumbled upon this excellent playground on one of the higher floors of the shopping area which my kids thought totally fantastic – it was excellently maintained, popular with young visitors, and enabled the kids to let off steam and enjoy the ‘shopping’ experience!  The Canadian approach to shopping and facilities for children especially, is something the UK could learn a lot from.  I struggled to get them off it after 30 mins …

One of Calgary’s most famous annual events is the ‘stampede’ which we had just missed – it’s held in July every year.  Clearly popular, there is still all the signage and banners on display, and the number of ‘cowboy’ or ‘western outfitters’ which provide the full ‘gear’ was interesting to see.  Just the smell of the leather as you pass the outlets was inviting in itself – and the range of clothes, boots, hats and accessories was staggering.  For someone who knows nothing about this whole area (not much call for it in north-west England), it was a brief glance into another world.

Whilst we were there, Calgary – along with Vancouver and Toronto – has been voted as one of the best places to live in the world by The Economist.  In fact, it comes in at number 5.  It is delightful, and even as a tourist, it’s a lovely city to visit and enjoy.  Whilst extremely glad we came, I personally prefer Edmonton, and am now looking to forward to returning back ‘up north’.  Maybe it’s my inherent northern traits coming out …