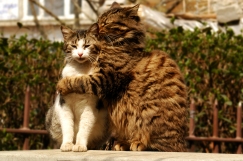 We’ve had thoughts and observations on moving to Canada from each of the 3 ‘kids’, and also one by ‘the husband’.  As part of the series, I thought it would be immensely interesting to capture the views and opinions from each of the grandparents.

We are immensely lucky to have a full complement of grandparents – both my parents and those of my husband, all of which are very much active and of sound body and mind.  Equally, whilst supportive, understanding and ever encouraging, each parent takes a different perspective on life’s challenges and adventures that are thrown at them – which makes this all the more compelling and interesting.

So, taking pole position and representing the grandparents fraternity first, is my mother.  Each has received a specially crafted set of questions from which each grandparent has been asked for a response – and in some cases, several responses have been received 😉

So, without further ado, here are my mother’s observations and thoughts about our relocation:

1. When she was told about the intended relocation, what were her immediate thoughts?

2. What does she think will be great about relocating to Canada?

To have a good experience of a different lifestyle

3. Relocating to another country – is this something she would have done?

No – she’s always liked being in England

4. What will she miss most about us not living in England?

5. What does think we’ll miss the most about not being in the UK?

Not having help close at hand

6. If she had a wishlist of 3 things she’s hoping we enjoy most about living in Canada, what are they?

7. What is she looking forward to most when we return?

Lots of hugs, and getting her ‘instructions’ from the youngest ‘kid’ (who’s quite dictatorial in approach!)

8. If she has to describe her thoughts about our move in 1 word, what would it be?

As a parting note, and not surprisingly, she’s trying hard to focus on the fact that the relocation won’t be for very long.

As a mother, I wouldn’t have expected her to say anything different.

3 thoughts on “Relocating – a grandparent’s perspective. Please welcome to the blog … grandma!”